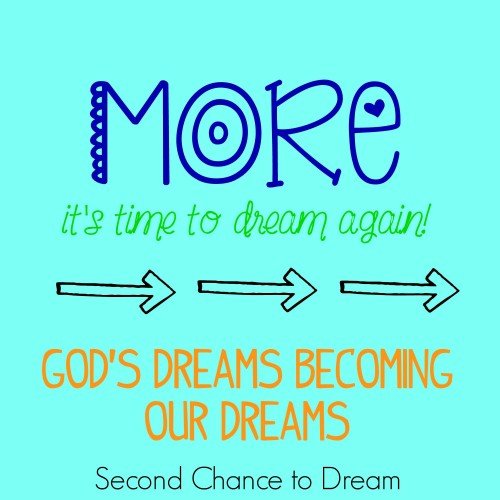 Hi, I’m back with our next lesson in MORE: It’s Time to Dream Again! If you missed the intro I suggest you  go read it and catch up with it here. I don’t want you to miss anything!

Can you imagine if you were out working in the yard and you looked over and saw an angel sitting under a tree and his very first words to you were, “The Lord is with you Mighty Warrior?” Huh?  Pardon me? Are you talking to me?  Um… I think you have the wrong person.  I’m not a Mighty Warrior! I think I would be pretty freaked out if that happened to me.  That did happen, it happened to Gideon.  You can read about here in Judges 6:11-14

11 The angel of the Lord came and sat down under the oak in Ophrah that belonged to Joash the Abiezrite, where his son Gideon was threshing wheat in a wine press to keep it from the Midianites. 12 When the angel of the Lord appeared to Gideon, he said, “The Lord is with you, mighty warrior.”13 “Pardon me, my lord,” Gideon replied, “but if the Lord is with us, why has all this happened to us? Where are all his wonders that our ancestors told us about when they said, ‘Did not the Lord bring us up out of Egypt?’ But now theLord has abandoned us and given us into the hand of Midian.” 14 The Lord turned to him and said, “Go in the strength you have and save Israel out of Midian’s hand. Am I not sending you?”

God had a dream He wanted Gideon to live out.  It wasn’t his dream but it’s one God gave him.  God wanted Gideon to fight the Midianites and regain the ground that was stolen by them. God wanted it done in a way that people would know it was Him doing it so he had Gideon’s army remain small in number.  Gideon’s army conquered  the Midianites with 300 people.  It’s a GREAT story and you can read about it in Judges 6-8.

Has God ever come to you and called you something you weren’t even close to being/living, like He did with Gideon?

He did with me and you can read all about my new name in this blog post Which Woman are you? Please read this is you have any doubt Him calling you something before it happens.

Has God ever given you a dream you didn’t want?

Did you obey?  Or run and hide? Ignore him?

I can tell you a story about a dream God had for me but I didn’t want and how I handled it.

My husband and I started our family very early-16 & 18 so I expected to stop growing our family early.  We had 4 children ages 20-8 and we were in a really good place.  My husband won a trip to Cancun and we had a lovely vacation.  We came home with a couple extra souvenirs that trip- Twins!  Not one, but two.  Some people dream of having twins.  I had NEVER thought about it. I was freaking out.  I was a mess. I was asking God why me? I felt tremendous guilt because I know there are women begging God for babies and here he was giving me not one but two.  I learned a tremendous lesson through one of the hardest seasons of my life that God always does good.  I also learned and this is really important, the more you fight the gift/trial the harder and messier your life will be.  It was HARD! But a lot of it was hard because I didn’t surrender to His will.

I have to say these boys have been such a joy! God in His infinite wisdom knew we needed these boys and that they needed to be raised by a Mighty Warrior so that I could raise up Moses’ to lead their generation. I have story after story  I could share about all the antics they did.  I also would like to say I enjoy them much more as teens than as 2 year olds. God knew what He was doing.

If you feel God calling you to a dream that you don’t want for yourself,  from a seasoned fighter I’d ask you to stop fighting it and surrender it makes your life so much easier.  God’s dreams aren’t always easy but they are ALWAYS worth it and they are always good.

~Write down your dreams and desires.  See last week for questions to start digging those dreams up.

~Are there any memories/situations that are surfacing that you forgot about that could possibly be your dream.  Example you used to love to sing as a little girl and then one day messed up and never sang again and you buried that dream?

~Is there anything the Lord is calling you to do right now that you are struggling to say YES to?  Write it down and tell someone safe.

Confession:  It was terrifying for me to start dreaming so if you’re struggling your not alone.  Just keep asking God to help you realize your dreams and he will gently lead you in that direction.  Next week I’ll talk about what to do if it’s really hard to dream because your dreams have been demolished.  Make sure you stop back next Wednesday.